I am not sure if I am the first to describe Venice as “organic;” however, there has never been a more perfect description to define Venice’s ever-changing persona. Venice is perhaps the most uniquely iconic seaside city in the world, and its impression changes by the minute with the dynamic light and active tide coming in and out. Flying into Venice via the USA, I was met with torrential rains in the early morning, which finally gave way to afternoon sunshine. The creaky, wet, gloomy, old, decaying Venice sinking and soaking in the morning rain… opened like flower petals in the springtime at the first glimpse of sunlight. The organic lagoon began to blossom as if the decay became antique, the gloom became a passion, the creaky became sweet sounds, and the desperate island illuminated with life, color, and hope. Heading out the first afternoon with no sleep since leaving Atlanta the day before, I was exhausted yet had so much adrenaline and utter excitement emanating from my soul. My heart, eyes, and brain forced me to follow the light and take photos; thus, the first day of thirty began with number 1 of 6500 images. Canal sunsets became the norm of my three days in Venice. This peaceful evening image was created standing at the intersection of two canals looking toward the dramatic sky as the distant campanile of St. Nicholas of Tolentino kept a watchful eye over Bellissimo Venezia.

Copyright
Dino Carbetta
Image Size
9003x6001 / 360.0MB
Keywords
"In the late afternoon the sun penetrates through ancient abandoned buildings along the Santa Fosca Canal in Venice"... The last day of our Pilgrimage was spent in one of the most iconic locations on earth, Venice! Busing to the docks at the Venetian Lagoon from Padua to catch our private boat to the Basilica di San Marco, an exemplary spiritual treasure for a special Mass. Touring the crowded Doge’s Palace proceeded, then set free to breathe in as much of the Venetian Island as possible until our final farewell dinner and return flight home in the morning. As standard fare, my fellow Pilgrim Patrick and I took off out of the starting gate with the notion to capture the entirety of Venice in a half of a day on foot. We covered exactly 8.3 miles walking, but with so much adrenaline, we could have doubled it into the nighttime. Our itinerary included Basilica’s, canals, bridges, gondolas, and anything resembling Venetian culture. Basilica dei Frari was foremost and Chiesa di San Geremia to visit St. Lucy. The maze Venice presents, GPS navigation only works occasionally on this crowded water complexity. The shutters on our cameras seemed permanently depressed as we desperately tried to capture everything we possibly could in such a short window of time, as we had to be at the waterside restaurant by 7:00 pm. It was a Bellissimo Spring day and the atmosphere that is exclusively Venice was intoxicating. We artfully meandered the narrow walkways and canals with a keen rhythm and capture of all that was superior. Not a thought of distance occurred in our surreptitious mission of Venice. We finally made it by dusk to our waterway restaurant Ristorante Pizzería Da Alvise, which was authentic and excellent.
Contained in galleries
Portafoglio (Portfolio) 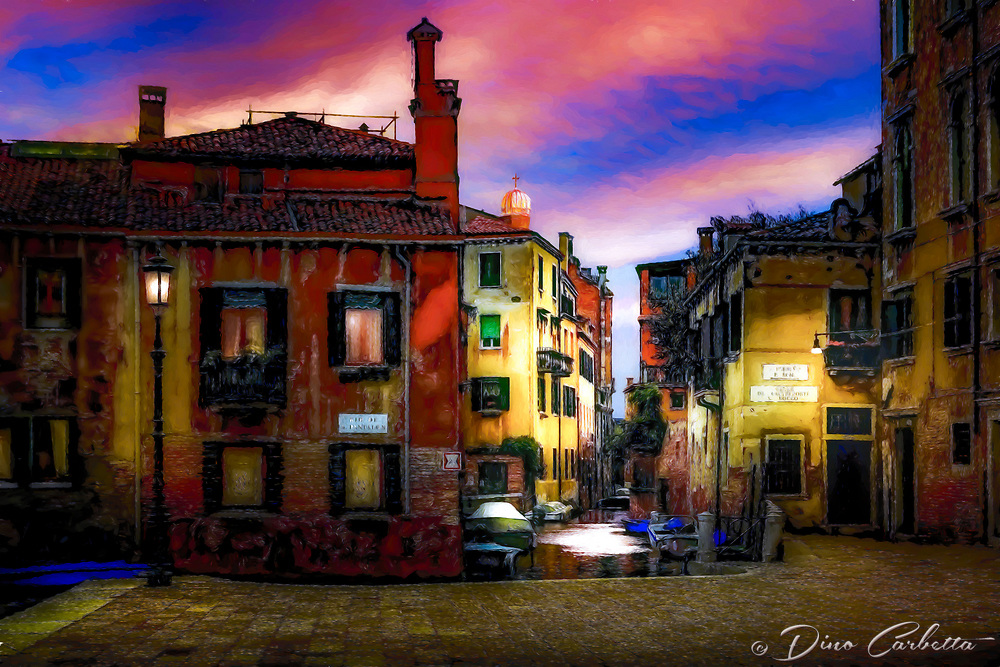