The church is dedicated to Saint Lawrence, Roman deacon and martyr. The name Lucina comes from the fourth-century Roman matron who permitted Christians to build a house of worship. Putatively, Pope Marcellus I, hid here during persecutions of Maxentius, while Pope Damasus I was elected here in 366. In the rebuilding of 1650, the aisled Basilical plan was destroyed and the side naves were replaced by Baroque chapels. This ceiling was made in 1857, under Pope Pius IX. The altarpiece is the Crucifixion by Guido Reni, about 1640, which is the most important artwork in the church. It was not painted for its setting, but was donated in 1669 by Cristina Duglioli Angelelli and inspired a devotion to the Crucifixion which informed the spiritual life of the parish. Christ is shown at the point of death. The Chiaroscuro depiction was copied many times and became an icon of the Counter-Reformation. Below the altar is a reliquary in which is preserved the gridiron that St Lawrence was allegedly martyred on. The marble throne of Pope Paschal II, in the apse behind the altar, has an inscription recording the placement here of the relics of Lawrence of Rome. It was an amazing experience to just stumble upon this ancient 1600-year-old Basilica while wondering and exploring Rome. I found many wonderful works of art, quaint spirituality, and a reverent historical expression of early Christianity. The altarpiece Crucifixion fresco draws one into the real meaning of this exemplary building and grounds one in Faith of the true Passion of Christ. 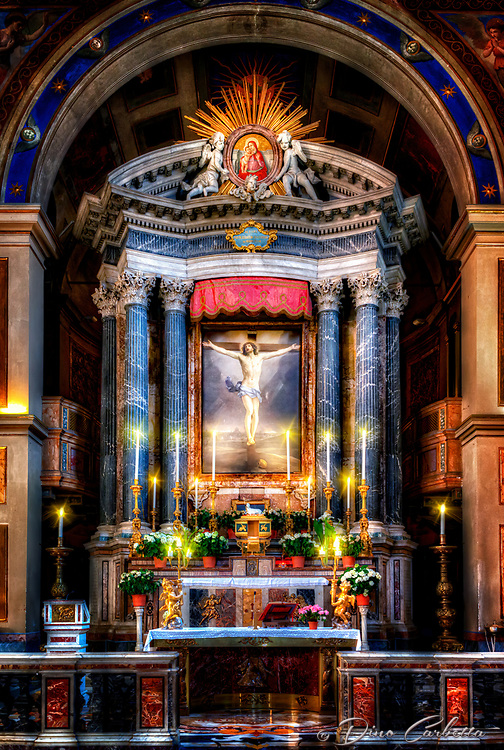